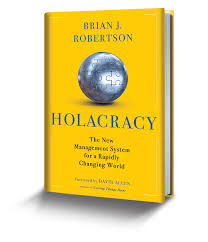 This book claims to offer an alternative way of organising that breaks away from the command-and-control model or as the author of the book calls it, “the predict and control” model. This seemed sufficiently in line with our aspirations as Appreciative Inquiry (AI) practitioners to warrant further investigation.

The book has noble, honourable and inspiring intentions: it offers holacracy as a “new operating system” for organisations that will create a “peer-topeer distributed authority system”. This operating system creates empowered people who are clear about the boundaries of their authority, about what they can expect from others, and are able to be highly effective in their roles. In this model the organising process itself becomes the ultimate power, more than any individual, and every individual can have a voice in designing and altering the process. It is a flat system of roles and links that delivers high autonomy. It is predicated on a system of roles (essentially disembodied job descriptions), decision-making circles (meetings by another name) and a process of links. It bravely attempts both to relieve leaders of the pressure of the demand of omnipotence, and to make it possible for weak signals of dysfunction, lack of alignment, gaps in accountability, missed opportunities etc. to be attended to promptly and effectively by empowered individuals. It offers a clear process for distinguishing working in the business from working on the business. It presents a view of strategy as “dynamic steering” by simple rules or principles towards a general purpose. In this way it attempts to simulate evolutionary development processes and indeed sees itself as an evolutionary model.

Reading this book was an interesting experience. The book is a “how-to” book and it sets out the process model in great detail, describing the purpose of key facilitator roles and the process of key tactical and governance meetings (“circles” in the terminology of the model). It is not hard to tell that the author and originator of this model has a software development background. My initial impression reading it was reminiscent of getting to grips with the complex board games of allies and axis that my sons and husband loved to play some years ago: a complex set of rules about the properties and powers of various pieces and cards subject to the rules of the dice. In the early stages as much time was spent consulting the rule-book as playing the game.

If this, then that

As I read on I realised there was a strong binary flavour underpinning much of the process, an “if this, then that” logic driven by an implicit flow chart of binary decision-making. The author’s argument is that these tight constraints work to create an empowered freedom within them. However, it is noticeable that much of the instruction reads “no discussion allowed” as the process is strictly followed. In essence he is trying to programme out the negative aspects of the human element in this organising process and to create an organisational process that functions effectively despite the emotionally and relationally wayward behaviour of people. This takes a lot of discipline on the part of all the players; which is to say it takes organisational energy.

The author is honest enough to point out that this new process does not always “take” in organisations despite various people’s interest, energy and support. He identifies that the key challenge, which is also at the heart of the model’s power, is the need for those with current power in the system to give it up. The author is of the opinion that after an initial period of painful discipline, the benefits will become clearer to all and the process will become more self-maintaining. It is clear that not all organisations make it over the hump. Similarly, while initially he took a whole-system “all or nothing” approach to implementation, he has since softened his views and in this book he offers a chapter on “holacracy-lite” possibilities that offers guidance on how to implement parts of the process.

The book is well written, offering a clear and detailed explanation of theholacracy organising process with a worked case study and anecdotes from experience used to illuminate how the various meetings and roles work. My take on the model presented This model is likely to appeal to those who have great faith in rationality and like highly structured, detailed and disciplined processes. In this sense it reads as very bureaucratic. It put me in mind of Lean, another process that, in theory, makes perfect sense; however in practice often takes a lot of energy to maintain. Both demand great human discipline. Robertson is clear that the role of facilitator “requires that you override your instinct to be polite or ‘nice’ and that you cut people off if they speak out of turn”, amongst other skills and abilities. In this way it is trying to programme out the emotional, irrational human decision-making influences such as ego, fear and group think, to create a less contaminated system of governance.

In many ways this model seems aligned with Appreciative Inquiry and co-creative ways of thinking. For example, it is more wedded to biological than mechanical metaphors, it prioritises adaptability over predictability, and it is focused on releasing collective intelligence within a leader-ful organisation. However, it seems to work against human nature, or human psychology, rather than with it. It is this constant fight against core features of human systems that, in my opinion, is at the heart of the gap between the promise of these kinds of models and the frequent experience of the lived reality.

However, I do think it offers a real, well-thought-out, and to some extent tried and tested alternative to our current creaking-under-the-strain-in-the-modern-era command-and-control organisational model. It will be interesting to see to what extent it is adapted across the organisational domain and I would love to hear from anyone who has either direct experience of working in an organisation based on this model, or who has attended training on it.