Firms of Endearment: How World-Class Companies PROFIT from Passion and Purpose – reviewed by Sarah Lewis 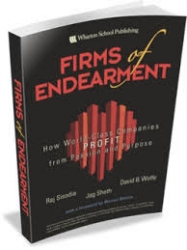 I went to the World Appreciative Inquiry Congress in Orlando, USA last year where this book was positively recommended by various luminaries such as David Cooperrider. After I heard about it for the third time, I thought I would investigate.

The book is based on two rounds of research undertaken by the authors in collaboration with their MBA students. They identified the organisations initially by asking the question “Tell us about some companies you love. Not just like but love.”

They evaluated the suggested organisations against some criteria and produced an initial batch of 18 companies that qualified, expanded to 62 in the current edition. The headline criteria are that, to qualify as a firm of endearment, the company or organisation must be passionate about doing good while doing well, and must be equally committed to doing well by all its shareholders, e.g. partners, investors, customers, society and employees. In addition there must be evidence that they live these values.

The headline news is that when they then compared the performance of these Firms of Endearment against the Good to Great companies and the Standard and Poor Top 500, they outperformed them against the market by four to six times. In other words, while Good to Great and Top 500 companies outperformed the market, the Firms of Endearment, particularly the American ones, outperformed the market even more, in a 6 to 1 ratio (p. 20). So of course the question is: chicken or egg? Interestingly, much later in the book, a model is presented that suggests that initially a company has to “establish a strong market position and a predictable stream of profits” before it can advance up a hierarchy equivalent to Maslow’s Hierarchy of Needs. At stage two of this Kyosei hierarchy “managers and workers cooperate”; at stage three the organisation “extends cooperation to customers, suppliers, communities and even competitors”; and finally, at stages four and five, gets to address global imbalances and help governments solve global problems (p.157).

In attempting to explain the rise of the Firm of Endearment as a successful business model, they suggest it is part of a wider 21st century zeitgeist, prompted in part by an ageing population experiencing the psychological process of “generativity”: “the disposition of older people to help incoming generations prepare for their time of stewardship of the common good” (p xiii-xiv). Many of these ageing baby boomers are also, of course, in senior and influential positions in business life. They also believe that the world is experiencing a strong search for meaning, which is driving people to look beyond the relationship of an organisation to their purse, to a relationship that speaks to their hearts, their passions and their values. This is described as “A transition from material want to meaning want.” (p. xxvii). The authors describe this as the emergence of the “Age of Transcendence”, suggesting that in this new age, organisations will need to connect with six specific senses – design, story, symphony, empathy, play and meaning – to engage and influence their stakeholders. All of which are asserted to have deep roots in the brain’s right hemisphere and all of which of course resonate with AI. There is a suggestion that we are moving from a “having” society to a “being” society. One can’t help noticing this resonates rather with our straitened and benighted times where there is less “having” to be had.

The book draws on its more than 60 exemplar organisations to illuminate the various features of a Firm of Endearment and how they are expressed differently with the various stakeholders. For example, it recounts how Costco implements practices that reduce staff turnover, increase per-person productivity and support good efficiencies that create a virtuous circle that allows the organisation to both pay better wages and generate more income per person than rivals in the same industry (p.35). Wegman is quoted to illustrate that high quality, highly motivated staff can result in a doubling of margin per square foot against the industry average, a gain which more than offsets their proportionally greater wage bill (p. 61).

There is no doubt the authors have identified an interesting group of organisations. A key question is whether, as argued, they are harbingers of a new age, or whether they are outlier organisations of a type that have always existed. The book itself starts well, but for this reader became progressively less interesting.

My take on this book

I can see why David and others got excited about this book. It is centred on answering a great AI question “How are we going to make this company an instrument of service to society even as we fulfil our obligation to build shareholder wealth?” (p. 3) and gives good, quantified answers to that question. The evidence that organisations can be good and do well is very convincing and valuable. The authors have clearly contributed immensely to the business case for Appreciative Inquiry.

The text is clearly located in idea that “Business is by far the greatest value creator in the world” (p. xv) and argues that we need to “Understand the power of capitalism to transform our world for the better” (xvi). This belief underpins the “Business as an Agent of World Benefit” AI project.

However, the book proceeds as if a concern for the common welfare is a new phenomena, with no reference to the Quaker-run businesses, for instance, of the 19th and 20th centuries. I could also take issue with the unintended sexism of calling older women ‘postmenopausal’ while older men are referred to, somewhat more graciously, as ‘grandfathers’ (p. xxviii). Similarly the first time the female personal pronoun pops up, is in relation to a hypothetical customer (p. 7); none of the experts or CEOs quoted to this point (or at all, according to memory but not rigorously checked) are female.

This book offers support to the Appreciative Inquiry project. It will also give you case study stories for your presentations. In addition there are some great statistics in here, but you have to dig through a lot to find them. I confess I didn’t finish the book.