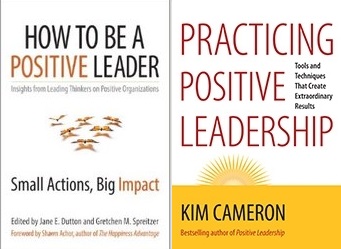 Both these books claim to offer practical ways to develop positive leadership. I felt they might have something to offer an appreciative practitioner.

In both books a considerable number of AI ideas and useful appreciative practices are to be found, although not labelled as such.

Practicing Positive Leadership follows on from Cameron’s excellent book Positive Leadership. A key figure in the field of positive organisational scholarship, he promises to spell out the practices that make a positive leader. Dutton and Spreitzer, also well known in the positive psychology field, present an edited text, pulling together practical advice from other experts in particular aspects of positive psychology. Both books are aimed at the managerial market. They are written in plain English with footnotes rather than in-text references. In the main the footnotes are adequate although not exhaustive and there are some untraceable assertions in the texts. In both books a considerable number of Appreciative Inquiry ideas and useful appreciative practices are to be found, although not labelled as such.

How To Be a Positive Leader

In this “how-to” book each of the contributors follows a format of introducing the concept, articulating the benefits of this practice, directing individuals and organisations in how they can increase their practice while finishing with a case-study that shows the concept in action. It works well as a formula, presenting an easy-to-follow read.

They have pulled together some of the best known names in positive psychology and asked them to talk on their specialist area, for instance Dutton herself on “Building High Quality Relationships”, Wrzesniewski on “Engaging in Job Crafting”, Cameron on “Activating Virtuousness”, and Quinn on “Imbuing the Organization with a Higher Purpose”. Although labelled differently, some of the ideas turned out to be familiar, for instance the “Outsource Inspiration” chapter by Grant.

Outsourced inspiration refers to the motivational effect of having contact with end users. For instance, at a university call centre devoted to contacting alumni for funds to support current deserving students, just a five minute face-to-face contact with a student who explained the difference a grant had made to their education and prospects resulted in an increase of 142 percent in weekly minutes on the phone and 171 percent in weekly revenue, compared to two control groups. To my mind this is great supporting evidence for the efficacy of the whole system principle of AI.

Another example of where positive psychology produces research that backs up existing appreciative practice is the chapter on “Cultivating Positive Identities”, which presents the GIVE model developed by Roberts, Dutton and others. This model suggests that one of the strategies to develop a positive identity is to “envision best possible selves and best possible futures” (p. 61). The chapter concludes with a very powerful case-study of the power of talk (in this case to affirm positive identity) as a secretary averts a school shooting disaster by talking the gunman into a peaceful surrender by affirming that he was a good human in trouble rather than a useless person (as he felt). Again this acts to confirm the AI emphasis on the power of talk.

This book presents five strategies for exercising positive leadership: creating a culture of abundance; developing positive energy networks; delivering negative feedback positively; establishing and achieving Everest goals; and applying positive leadership in organisations. From the very beginning, where he talks about framing activity to focus on the positive (so not so much “eliminating waste and inefficiency” as “building sustainable improvement”, p. 1), it is clear this approach resonates with AI. This impression is reinforced when he comments that “positive leadership is heliotropic”, with “kindness and gratitude” acting as the sunlight towards which positive leadership grows. Throughout this text there is mention of the importance of language (p. 28), the importance of stories (p. 44), and strengths (p. 58).

The book generally offers useful ideas and practices. The chapter on giving negative feedback positively is particularly helpful on a micro- or tactical level, while the chapter on applying positive leadership is based on his and Quinn’s Competing Values Framework at the macro- or strategic level. This chapter offers a relatively sophisticated overview of leadership, and brings in other models such as Kano’s (p. 133) to support the argument. The final chapter offers a useful summary of the whole book.

These books offer easy-to-read guidance on practical steps towards positive leadership. They also contain useful research findings, including statistics. They are both well-organised and presented. For those new to the area, and the research, they would both make a very good, light-read introduction. For those looking for data to build their case for appreciative practice, there is a lot here.

My take on the books

These books are written from a managerial perspective based unquestioningly on an underlying business-case philosophy of increased productivity. To anyone who has made a study of positive psychology, much of the material will be familiar; yet there are still nuggets of information in the statistics quoted, for instance. The practices recommended are sound and helpful for leaders, consultant and coaches.

Sarah Lewis, C. Psychol., is an experienced strengths-based organisational consultant. She has particular expertise in Appreciative Inquiry and other co-creative change processes. Her latest book, Positive Psychology and Change, is available now.