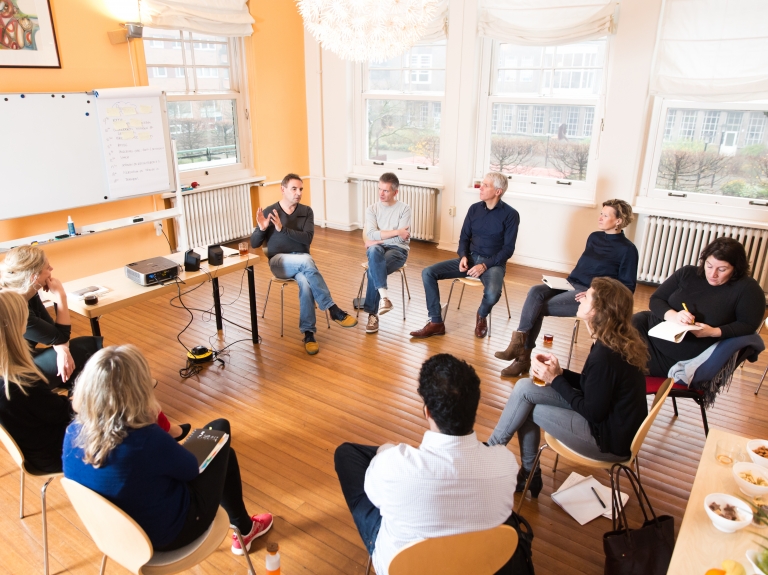 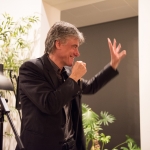 By Willem de Wijs
Willem is an organizational psychologist, and a lecturer at the Instituut voor Interventiekunde (Institute for Interventionism) in Amsterdam. He worked closely with Wick.

Wick and I met in the Nederlands Instituut voor Psychologen (NIP; Netherlands Institute for Psychologists). We became friends: we never stopped talking, preferably in a bar with drinks and ‘bitterballen’.

When Wick started his Institute he asked me to be a guest lecturer in organizational change and development.

I left Tata Steel Europe; Wick asked me to join him at the Institute. I added new perspectives to the social psychology foundation: management experience, systems thinking, and (international) profit-oriented company experience.

Wick learned from his parents to do well in the world: he described himself as being almost naïve in wanting to make the world a better place. Based on the reactions of his friends, students and colleagues to his passing away, I’m certain he succeeded.

He did so not only by being the beautiful human being he was, but also through his work as an interventionist, consultant, teacher, coach and trainer.

During the time he was studying Social Psychology at the Vrije Universiteit in Amsterdam, and after, Wick was involved in Jannie de Weerd’s Social Psychology of Intervening course, which he was involved in, first as a student and later as a lecturer, along with Marjoka van Doorn. This course was based on teaching students the theory, skills and practice of intervening in groups and organizations using applied social psychology and group dynamics principles.

The serious scholar–practitioner in Wick was thrilled by reading “classical stuff” by Lewin, Weick, Argyris, Schein, Johnson and Johnson, Burke, Mintzberg, Shaw, Harrison, Bennis and Sheppard, Kolb, Gibbs and Block. I am probably leaving out many others, given the thousands of books Wick studied over the years.

About twelve years ago, the university chose other priorities and the program was slated to disappear. Wick decided to start his Instituut voor Interventiekunde (IvI; Institute for Interventionism). The institute was Wick, and Wick was the institute. He enriched the course by inviting guest teachers: I was one.

Although Wick always defined Appreciative Inquiry as a variant of Organizational Development, he was intrigued by the difference in the dominant discourse, the wholeness and the engagement, and its potential impact on society. And, of course, he followed both NTL programs: OD and AI. Always curious for new insights and interactions.

Wick and IvI started to offer shorter and longer courses on AI, alongside the course on interventionism; he became almost “an AI guru”. It’s a term he hated, because he regarded AI as a variant of classic interventions, not a fad or a cult, and he never intended to become anyone’s guru. And by acting in that way, he was an inspiring and successful teacher for his students, and an effective interventionist for clients.

All he wanted was to work with his students and clients on interventions they could and would want to apply the very next day in their own practice. No wonder his impact at a personal and organizational level is highly esteemed: he was intent on making the world a better place.

About five years ago he started an OD intervention on the Institute itself, developing himself as well in the process. I was so lucky to be a part of and to have contributed to that journey. The course for interventionism was redesigned and certified as a post-master’s program. This October, the first group of students received their certificates. The “back office” of the institute has been organized: Nathalie van der Vaart-van de Loo, his wife, has been a strong force. Wick even became an employer for a while, to his own astonishment and enjoyment.

He worked with a group of fellow practitioners he believed in and had fun with.

He was the great connector.

He planned to finally write the book about the social psychology of intervening.

He planned to be more at home with Nathalie.

Wick is no longer the Instituut, but the Instituut will live on in his spirit: making this world a better place.