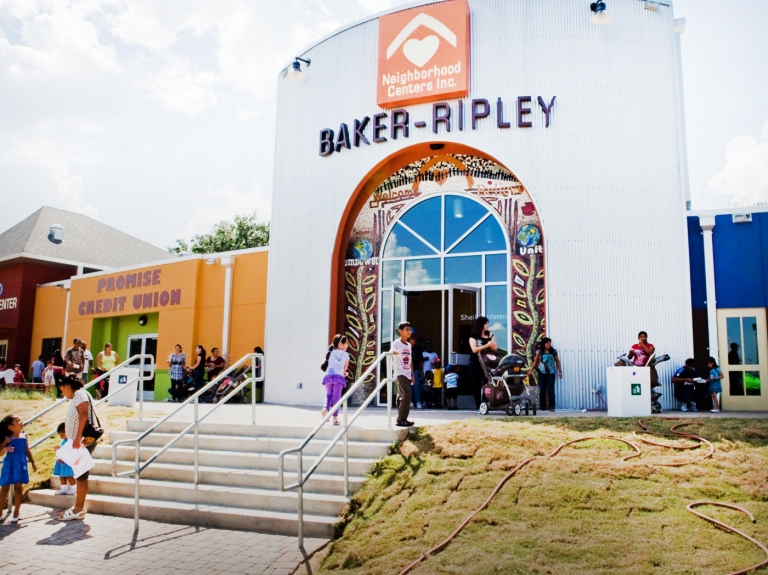 Common unity is the way I often describe the heart of community organisations. This description is especially fitting when it comes to BakerRipley, a community development organisation located in Houston, Texas USA that assists individuals and groups realise their aspirations. Ann Hilbig is our voice from the field in this issue of AI Practitioner, and shares how combining Appreciative Inquiry (AI) with Asset-Based Community Development has enabled BakerRipley develop the transformational framework aptly titled Appreciative Community Building.

In August 2017, the Atlantic Hurricane named Harvey devastated many areas situated across the Atlantic Ocean and Gulf of Mexico, including Houston, and the Team at BakerRipley has since been involved in supporting many who have been affected.

BakerRipley was founded in 1907 as a part of the Settlement House movement. It is dedicated to keeping the region a place of opportunity for everyone. Each year, more than half-a-million people walk through the doors of our community centres, senior centres, early childhood centres, career offices or charter schools seeking to turn their aspirations into reality. When they arrive, we honour their journey, consider their present circumstance, and explore their desires for the future. As we unlock their stories, we find people yearning for a future different from their past – one where they can earn, learn and belong.

Our own journey to becoming a strengths-based organisation is a reflection of those taken by our neighbours. At the dawn of the new millennium, our centres were floundering – lacking a transformational approach. They were struggling to survive – much like the people we serve. But the powerful ideal of our Settlement House roots remained – an unwavering faith in neighbours connecting and nurturing their dreams.

Yet, even though our purpose at BakerRipley had never seemed more important, we weren’t realising our deepest values. Too many of those we serve weren’t seeing their dreams come to life. Was it our basic approach? Was it our service model? We began to ask ourselves tough questions, face hard truths, take calculated risks – and bring about change. 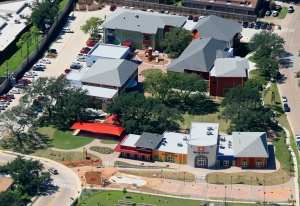 The road to change began by questioning our questions, and discovering that the answers we needed lay in a new way to ask those questions. We asked first not what was wrong with the neighbourhoods we serve but what was right.

From the answers came a new beginning for our neighbours. And we used the same approach internally to change and strengthen our own organisation. So this is a story of change that began with a first new question – What is right? – and how we created a transformational new framework called Appreciative Community Building.

During the late 1800s, cities were growing rapidly as families migrated from rural areas for work and millions of immigrants arrived from overseas. The Settlement House movement was meant to welcome newcomers and help them build a new life. Many of the newcomers lived in impoverished conditions in crowded neighbourhoods. In response, the movement focused on addressing their basic needs. More broadly, it was dedicated to promoting social justice and community development.

In Houston, the movement began with the founding of our organisation – at that time called the Houston Settlement Association – in 1907. Our founder, Alice Graham Baker, believed all residents should have opportunity for education, health, work with dignity and informed participation in democracy. Since its inception, BakerRipley has held true to a key tenet of Baker’s philosophy: neighbourhood involvement.

In the movement’s early days, settlement workers lived in the neighbourhoods. Their homes became gathering places – the predecessors of community centres. Later, new models led to the employment of professional staff rather than neighbourhood workers. Funding was provided by public and private sources interested in meeting the “needs” of the community. The result was a “needs-based” service model that remains in widespread use today.

As the 1900s came to a close, Houston – now the most ethnically and culturally diverse city in the nation – was growing. We were headed toward a regional population of more than six million people representing almost every country on the planet, creating new dynamics and new challenges.

BakerRipley maintained our commitment to providing needed services in an efficient, professional way. Community centres, a primary vehicle for services, were vital community hubs that helped strengthen the social, political and economic viability of neighbourhoods. Yet something was amiss.

As BakerRipley approached its 100th year, we began to question the “needs-based” model. The issue became particularly clear as we started working in Gulfton – a richly diverse neighbourhood in southwest Houston full of hopeful, ambitious immigrants that represented the kind of community we could increasingly expect in the future. Focusing on what was “needed” or “broken” seemed inadequate when facing people so full of promise.

We knew the people we serve possess strengths and talents that went undiscovered when we only assessed what they needed. We saw people with amazing inner resources and abilities, and recognised they were seeking opportunities to fulfil their aspirations.

We shifted our focus to the powerful untapped strengths of people and communities – their assets. We searched for a system of identifying those assets and integrating them into our daily work. By doing so, we could assist people in choosing their own direction, finding their own solutions and building their own communities.

This shift became most evident as we worked in Gulfton. The area had changed dramatically as thousands of immigrants from more than eighty countries settled there. These newcomers were striving to get ahead. They wanted to make their community a better place to live – and by 2005, were expressing a collective desire for a community centre.

The emergent aspirations of Gulfton during this time coincided perfectly with our own organisational desire to find a better way of working with our neighbours. This became an opportunity to discover a new community development strategy.

We experimented. We learned. We worked hard. We joined the powerful tool of AI with the transformational asset-based community development approach. In doing so, we forged a new framework that we call Appreciative Community Building. 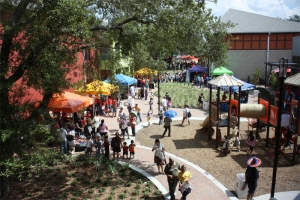 Aimed at empowering people and communities to discover their inner resources and use them to realise their individual and collective aspirations, Appreciative Community Building provides a way for them to own their future.

We were first intrigued by an approach developed by Kretzmann and McKnight at Northwestern University Asset-Based Community Development (ABCD). ABCD posits that every person has skills and talents, asserting that every time someone uses those resources, the individual and the community become stronger. By putting ABCD into practice, we could help neighbourhoods identify and nurture personal and collective assets in order to build from within.

Embracing this approach called for a strategic change in the way we worked. If our programs needed to be driven by ABCD principles and practices, so did our own internal structures and roles. Within our community centres, “centre managers” became “community developers,” reflecting the shift from a community building to building community. Community developers spend their time focused outward on the neighbourhood. We hired program developers to focus on designing services and activities within the centres. Wherever possible, we linked with other public and private partners to leverage assets and resources.

In order to base transformational change on existing community assets, we needed a systematic way of identifying those assets. For that, we use the power of AI.

AI fits perfectly into an asset-based approach to community development. It engages people in conversations about what matters most deeply to them. Both practical and democratic, it identifies what is positive, and connects existing assets to a future vision.

Our Appreciative Community Building process begins with one-on-one interviews. The many interviewees – long-time residents, newcomers, business owners, elected leaders, faith-based leaders and educators – represent the whole range of cultural diversity. Together we uncover skills, talents and aspirations – individual assets. We discover what they value most, what they envision for the future and how that vision can be realised.

From these interviews we compile data, finding key words and phrases. Basic themes emerge, as does the network of relationships existing in the community. We discover what neighbours care about, what their strengths are, and their collective aspirations – community assets. We then meet with them again in focus groups to confirm and refine what we’ve learned.

Next, we produce a Community Voices Report to publish our findings, and we present the report in a large public meeting. This report is a powerful tool that reframes the way the neighbourhood is viewed both internally and externally.

Following the Voices meeting, core community members come together to create a shared vision for their neighbourhood. Action teams form – supported by staff – to develop plans to realise that vision. Community leaders emerge and are trained, and projects are successfully implemented.

We first used this framework in 2005 in Gulfton. By asking questions that focused on the unique strengths and assets – rather than on weaknesses and problems – we uncovered a very different picture of Gulfton than was portrayed by media and researchers. We also found an extensive web of relationships that united the community. What began as interviews and community meetings became a movement resulting in a vibrant community centre – where everything from the colour on the walls to what happens within them is designed and brought to life by neighbours themselves.

We use this approach with neighbourhoods and groups across Houston. Hundreds of interviews have uncovered the unique assets each group holds, followed by the development of collective visions and action toward change. It has been exciting to watch people find their voices and take ownership of their initiatives – truly transforming their lives. 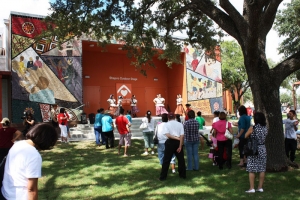