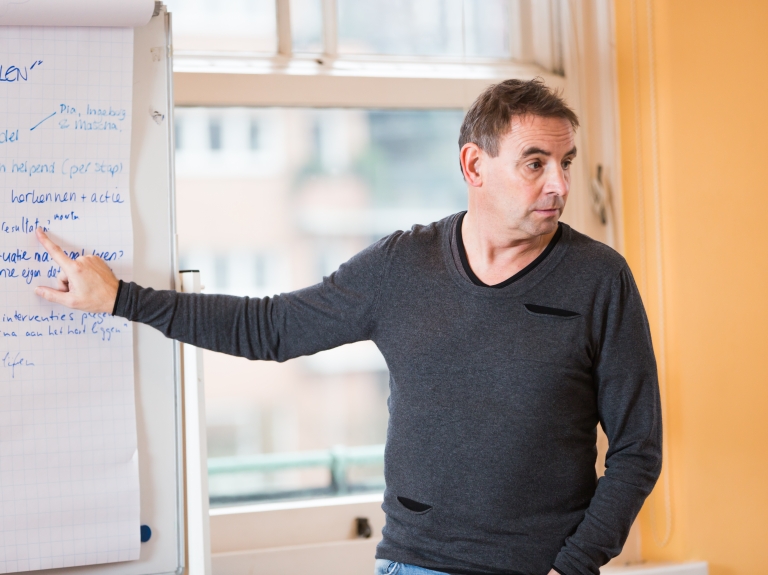 We – Floor and Suzanne – finished our post-master’s studies at the Instituut voor Interventiekunde this October, 2017. In our two years of study, we learned a lot from Wick: about asking questions instead of making assumptions, about the importance of building a relationship with people to be able to connect regarding the content of their questions and how being open-minded motivates people to organize. In this article, we would like to share how we met Wick and what we learned from him, as our teacher, and especially from working with him, as he took us with him to his clients.

How Wick helped me appreciate the appreciative perspective, by Suzanne

In 2013 I met Wick. I had just finished my masters’ degree in Social Psychology and was looking for a new challenge. My professor suggested the post-master’s course at the Wick’s institute. I wanted to see how the institute worked, so I took part in a workshop Wick gave. I remember him entering the room. He looked happy and bouncy. He smiled, laughed a lot, talked with everybody and didn’t act as most teachers I had met acted: he stood out because he was approachable. That turned out to be true, as at the end of the evening he suggested we would all go to a bar to have a drink and talk some more.

After first meeting Wick, I attended some workshops in Appreciative Inquiry (AI) and organizational development at the institute. During that period, we had several conversations in which I expressed doubts about starting the course. I was afraid it was too vague and a bit too positive for me, especially the AI part. He understood, and invited me to be critical. “After all,” he said, “AI is not just about the positive”, (which is also the title of Gervase Bushe’s article, in which he argues that AI is about the generative). I finally enrolled in the post-master’s course in 2015.

Halfway through my study, Wick asked me to work with him on an assignment for a client. The client’s organization aimed to set up an innovation team and wanted our help in training the team members to be innovative, to have courage and to have impact. In the first meeting the start-up members of the innovation team asked Wick, “How do we attract the people we want to join the team?” and “What should the requirements for joining be?” As the clients and I began brainstorming about desirable characteristics, Wick stopped us and said “The people who show up are the right people.” I was a bit annoyed by this statement (probably because of the positivity), but the more I thought about it, the more it intrigued me.

For me, the statement Wick made that afternoon reflects what he considered important. The people who show up are the right people. Not because of faith, but because showing up is an important first step in starting something. It is an indication of a person’s motivation to join. And motivation – in psychology and in interventionism – is important.

In the post-master’s course at the institute, we learned that an interventionist has three primary tasks when helping a person, group or organization to be more effective in moving toward their goal. The first is gathering valid information. The second is to help the person, group or organization make free and informed choices based on the information that has been gathered. The third task is to increase the intrinsic motivation of the people involved by acting on the first two tasks.

Wick almost never excluded people, even though other people would ask him for requirements or restrictions.

By stating that showing up is an (or the most) important requirement Wick empowered people to push their own boundaries and just join. It felt like he was saying: “It doesn’t matter that you don’t fit the image I had in mind when starting this program/course/training. I appreciate you wanting to join, and for that you can.” He tried to not let his expectations influence his decisions, but to keep an open mind, stay curious and explore: “Come on, join in! I am curious about what we are going to create together!”

How Wick taught me to change the world, one conversation at a time, by Floor

Full of energy and cheerful. That’s how I walked out of the Instituut’s door after my first meeting with Wick. His integrity and curious manner of asking questions, inquiring what I was looking for and able to do, gave me new and fruitful ground, and trust in the path I just had chosen. That’s what Wick was capable of: helping people see their potential and dreams, wholeheartedly supporting them in taking steps to come closer to that dream.

More than a year after this meeting I joined the post-master’s course in Intervention studies, and started to work with Wick for his clients. What connected us was our idealism and sense of urgency to contribute to a more inclusive society. That is why we were asked to do a special assignment: a Dutch municipality hired us to help in creating support in one neighborhood for a planned reception facility for 400 refugees in the center of the city. Along with smaller ones, we organized two large-scale interventions where all kinds of stakeholders – from an angry neighbor to a newcomer, from an alderman to a local entrepreneur, from young to old – could exchange views.

Wick taught me that the condition required to make this a success was to organize the right mix of diversity at every roundtable: tables without majorities. These evenings we changed the world one conversation at a time. Wick led these 150 people in exchanging their experiences, ideas and visions, based on AI, and with room for contending voices. In the small conversations at fifteen round tables, people listened to each other’s insights and gave them new meanings. Relaxation about the planning of the new asylum seekers’ center came into being. Afterwards, the regional newspaper had the headline Inhabitants positive about the arrival of the asylum seeker center and We welcome the new neighbours.

What will I remember most about studying and working with Wick?

How he stole the hearts of all the participants in less than a minute time and time again.

That he was never scared of big or negative emotions: “Emotions are facts that deserve to be understood”.

How he knew how to involve even the most recalcitrant participants. When they came back after an exercise and they told him that they hadn’t followed up on his assignment, Wick cheerfully asked: “Interesting, tell me all about it: what did you discuss then?”

His trust that the answer is always in the room. When I sometimes tended to intervene, or fill the silent spaces, he showed me his ability of “hanging loose” and giving people space to ponder what things meant for them.

That a program could change completely up to the last minute before starting, and that nonetheless before the end of the day everything had still been discussed that needed to be.

That it is always the first small step that counts – not the big words.

Wick has inspired an enormous number of people. When we heard the sad news about his terminal illness, it touched us deeply. At the same time, the ways in which he inspired and energised us – and so many others –to move on, with all the knowledge, instruments and curiosity to change the world one conversation at a time became clear.

Thank you dearly, Wick. We will miss you, but we will never forget the lessons you taught us.