Call for submissions – An African Perspective on Appreciative Inquiry 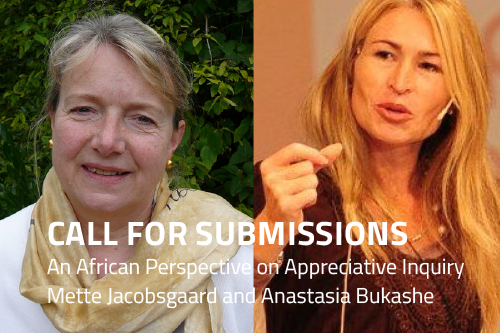 Call for submissions
AI Practitioner to be published in February 2019

The initial ideas that have become the AI practice were introduced in Africa in the early 1990s. One of the most significant contributions to this was the work of the USAID-sponsored Global Excellence in Management (GEM) programme funded by the US Agency for International Development from 1994 to 2000. The GEM Initiative became a living laboratory for sowing the seeds of AI in a number of African countries. Through the years much of what has become accepted AI practice was first developed in Africa. This story was told in the August 2011 issue of the AIP.

Twenty-five years after Appreciative Inquiry was introduced in Africa we are curious to know who is using the approach? What has the impact been? Is AI being used just as another technique or has it made sustained transformations? We are particularly curious to know from Africans in Africa who have taken AI on board. What impact and changes have been made? Are there innovations that can be attributed specifically to AI in Africa?

Focus of the issue:
Profiling the variety of sectors, issues and places AI is being used on the continent.

Questions for inspiration:
How have people in Africa contextualised AI?
How do you locate AI in the African context – what lessons are there?
What is the voice of AI in Africa? What are we learning?
How do we sustain AI in Africa?

Ways to contribute:
We are looking for written contributions including creative presentations and pictures. The final written submissions will range from 500 to 2000 words. Art and graphics should be in high resolution and ready for publication. Poetry should be formatted for publication.

Submitting a Proposal / Draft:
If you are excited to contribute to this issue please send a proposal to 101572.622@compuserve.com no later than 12 November, maximum 300 words. By 19 November 2018 we will let you know which proposals will be accepted and need to receive your first draft at the latest by 4 December 2018. The final draft will need to be completed by 8 January 2019 in order to publish the journal on 1 February 2019.